Athol is a small city located in the northern part of Kootenai County, Idaho, with an estimated population of 695. It was first incorporated as a village on August 10, 1909, and it officially became a city in the state of Idaho on November 1967. Athol is conveniently located near major local attractions, and is a crossroad to U.S. Highways 54 and 95.

Although it's a small city, there are plenty of local attractions that residents are able to enjoy, among which are two state parks and an amusement park. The Farragut State Park, which is four thousand acres and was once a World War II naval training station, is only four miles East of Athol. In addition to its scenery, disc golf, fishing, hiking, biking, equestrian facilities, camping, and even a World War II museum, are among some of the activities the Farragut State Park offers. Ten miles North of Athol is Round Lake State Park, a beautifully forested park also offering a number of activities including camping, hiking, biking, disc golf, fishing, and much more.

Additionally, just two miles South of the city is Silverwood Theme Park. Silverwood Theme Park is the Pacific Northwest's largest amusement park. It has over seventy rides, slides, shows, attractions, and even an adjacent water park. Boulder Beach Water Park has wave pools, waterslides, and lazy river rafting. There isn't a shortage of local attractions near the small city of Athol.

While the city of Athol has approximately twenty five local businesses, most of the residents travel to larger nearby cities for work and for shopping. The city's public education is part of the Lakeland School District. Children in grades Pre-Kindergarten through fifth grade attend Athol Elementary School. On the other hand, Middle and High School students commute to Spirit Lake for school, a city only seven miles East of Athol. The closest higher learning institution, North Idaho College, is located in Coeur d'Alene.

The city of Athol provides its residents street and water services, the rest of the utilities, including electricity, gas, telephone, television, and internet services are provided by private companies.

or those seeking the North Idaho lifestyle, 630 Tag Along Way DELIVERS! Situated in the West Lake Careywood area of Bonner County, this fabulous property features extensi...

AMAZING OPPORTUNITY! Looking for a place near the surrounding cities (in the middle of CDA/Spirit Lake/Sandpoint) but don't want to be directly in town? Stop looking, you...

Get back to nature with this flat and beautifully wooded 5 acre parcel that has NO HOA or CCR's! This parcel offers a ton of privacy and is extremely quiet while still on... 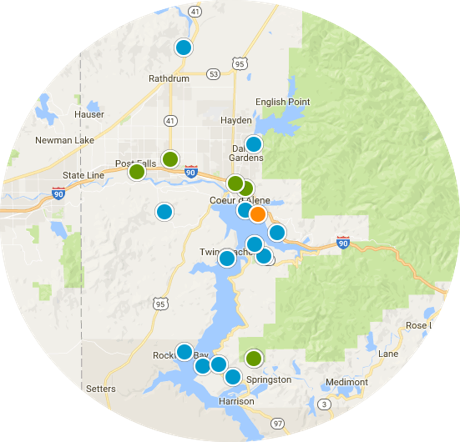